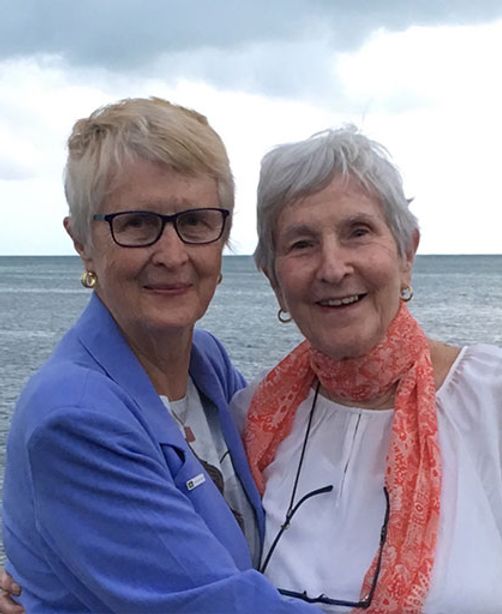 Marilyn and Jody met more than 40 years ago at work, the doctor/nurse thing you know.

Time passed, busy with work, training, and living in the closet. Then we decided that we needed a “gay” vacation so we went to P’town, staying at a Holiday Inn so no one would suspect anything.

There we had our first chance to hear live lesbian music from Alix Dobkin. We both remember leaving P’town, arriving in Boston, and feeling the difference in the atmosphere. We never knew that oppression was palpable in the air.

That led to our first Robin Tyler led Women’s Southern Music and Comedy Festival in Ga. We had many friends there who were much further out than we were. Those experiences along with encouragement from friends, led us to began the journey out of that oppressive closet.

We began by attending social events in our workplaces together. Along came LAGPAC. First the LA Gay Political Action Committee and then Lesbian And Gay PAC. That really inspired us to pay attention to local politics, elected officials, and causes necessary for the safety and security of the LGBT community.

Of course, HIV was having its full impact about this time. This brought the LGBT community together for this cause leading us to work together for lots of other causes including supporting fair minded elected officials who would work with us in our drive for non-discrimination policies.

Charlene’s Bar served as the gathering place for a lot of the work, with politicians and our activists using it for meetings and events. She really helped change our world. It was fascinating to watch local elected officials attending meetings at a lesbian bar.

Marilyn also began writing her column Lesbian Voices for IMPAC newspaper. She did that for 10 years keeping all of us up-to-date in happenings in the Lesbian community. She also served on the Mayor’s (Sidney Barthelemy) Advisory Committee which participated in trainings for the Police Academy among many other functions.

The Forum for Equality began in 1989. We were involved in that organization with Jody serving on the Steering Committee. Over the years, so much effort by so many people has led this organization to it’s current role as a state-wide political group.

Next we began working with the Human Rights Campaign. Jody served on the local Steering Committee, on the Board of Governors, and the Board of Directors. She is currently co-chair of the Emeritus Council. Marilyn did so much for work for the local events especially the initial women’s events held here in NOLA setting a precedent leading to similar events at other HRC sites.

We have each been involved and contributed to other organizations fighting for equality, such as Planned Parenthood, and the ACLU. Much time has been spent fighting for better lives for many such as Grace House where Marilyn served on the Board and volunteered for over 20 years once being chosen as the volunteer of the year. She also served many years as a volunteer at Lazarus House in its early formative years when all the clients were quite ill.

We had the opportunity to participate in the early planning stages for NOAGE. You can tell that it has grown into an organization serving the needs of a huge portion of the NOLA LGBT community.

We are looking forward to many more years of service to the NOLA LGBT community.